Today the Chilean government announced its intentions to establish the Nazca Desventuradas Marine Park.  This is the largest marine park in both North and South America.  It includes an area of 297,518 square kilometers or 114,872 square miles.  According to Oceana, the Desventuradas Marine Park is considered one of the last remaining pristine oceanic regions in South America.  The decision to protect the park was backed by research conducted by both National Geographic and Oceana.

It will ensure the region’s survival for future generations and offer a sanctuary for its unique ecosystem and fisheries which have been depleted in recent decades.  The Desventuradas Marine Park is an important step, and one that should be emulated by other countries in the Western Hemisphere.  The United States has a similar opportunity in the arctic region.

Last week, after fighting a long and impassioned battle to drill in the arctic, Shell has abandoned drilling and a project that has cost the company over $7 billion.  Shell stated “it had found indications of oil and gas in the Burger J well, some 150 miles from Barrow, Alaska, but said it wasn’t enough to justify further exploration.”  In other words, they had “disappointing results.”  Shell’s resolution to end drilling and its controversial announcement surfaces at a time when fossil fuel energy is rapidly losing support as consumers call for cleaner and safer energy sources, particularly wind and solar.

Following Shell’s announcement, the US government should move forward to protect the Chukchi Sea, one of the most pristine and largest remaining arctic oceanic environments in the western hemisphere.  This region is not only a keyb impacted by climate change, it also houses innumerable birds, plants, and wildlife who depend on an environment protected from oil, gas, and other pollutants.  Environmentalists, future generations, and lawmakers should work cooperatively to follow Chile’s example and protect this invaluable resource for generations to come.

Polar bears depend on ice in the Chukchi Sea

This article by Patagonia’s Paul Moinester is a great follow up to Why Protect ANWR.  This opens our eyes to even more threatened areas in Alaska’ frontier.  Patagonia is lending their resources to protecting these vital lands and waters.  The region of concern here is the Chuitna River, near the village of Tyonek.  This region is a valuable, pristine environment for salmon, bear, moose, birds, and other wildlife.  It is threatened by open-pit coal mines, specifically the infamous Pebble Mine, and other industrial threats.  Join Patagonia and other activists to lend your support in protecting this region for future generations humans and wildlife.

For more than 30 years, the state of Alaska has been a high priority on environmental organizations watch list. Known as “the Last Frontier,” anyone who has visited the state of Alaska knows it deserves the name. With more coastlines than the contiguous

United States combined, 3 million lakes, and 663,300 square miles for its 736,732 people, Alaska is truly a sanctuary for wildlife (Facts about Alaska, n.d.). The state is also a rich area for natural resources. The clash of these two advantages is the reason for many long-standing disputes over Alaska’s frontiers.   In 2015, environmental advocates achieved a coup when the Obama administration proposed an extension of “wilderness” in the Alaska National Wildlife Refuge (ANWR) to 12.28 million acres. While this recommendation does not ensure the region’s protection, it is a significant step in the right direction. Nonprofit organization’s crisis communication tactics have played an instrumental role in gaining the support of other organizations – private and public – and the attention of the people, to aid and protect Alaska’s lands (Sanders, 2015).

The future of ANWR has rested in the balance for years. Coined, “The American Serengeti” for its rich biodiversity and pristine ecosystems, ANWR on Alaska’s North Slope offers habitat to over 200 species of birds, 42 species of fish, and 45 mammals – including the polar bear and a herd of 120,000 caribou (Arctic National Wildlife Refuge, 2015). Established as a refuge in 1960 by the Eisenhower Administration, this region is also protected from oil and gas drilling. The issue concerning ANWR has seen several threatening events since the 1980s, which have brought the refuge into public attention. The first took place in 1989, when a bill to open the refuge nearly passed, failing only because public attention was so wrought by the disastrous Exxon-Valdez oil spill.

While this disaster brought discussions on ANWR to a halt, recent developments have “tipped” the refuge back into the public eye. “Despite the current administration’s repeal of the offshore drilling ban, 130 members of Congress have cosponsored pending Arctic refuge wilderness bills” (Englehard, 2010). Other protected areas in Alaska are also under contestation including the Chukchi Sea and the National Petroleum Reserve, the decisions concerning ANWR could set an important precedent for Alaska’ future. Lobbyists for both environmental organizations and energy corporations are actively vying for the future of ANWR, hoping to sway future policy in their favor (Eilperin, 2015). Environmental organizations heavily contest drilling in prominent wildlife sanctuaries. The history of oil and gas extraction in Alaska is polluted by ongoing, distressing mishaps, which dumped crude materials into important breeding and nesting areas. The Exxon-Valdez oil spill is the worse case, but not the only instance. Environmentalists and their allies are striving to ensure these events don’t increase by limiting drilling in key sanctuaries.

Nonprofit organizations must often work with limited resources to complete large jobs. This is why it is essential for these groups to build and maintain relationships with like-minded organizations. By building coalitions, they gain financial resources, geographic spread, and communicative manpower. In response to ANWR, they developed a large coalition of individuals, local, state, and national organizations. These included noted journalists, local and national politicians, and pro-environment, anti-drilling organizations. Other noted supporters include the National Wildlife Federation, the Alaska Inter-Tribal Council, and the U.S. Fish and Wildlife Service. Senator John McCain, while running for president on the republican ticket, with an Alaskan vice president, quoted “As far as

One of the most valuable responses for a nonprofit in crisis is to gain the support of the general public. Often impacted individuals are unaware of potential threats; by informing the public NPOs can gain the support of motivated and influential advocates. Organizations utilize several tactics to inform their publics. These include weekly

newsletters, regular social media postings, relevant blogs, and a regularly updated webpage. Organizations’ state and local chapters are also instrumental in gaining the attention of the media, maintaining relationships with journalists, and encouraging the regular publication of crisis-related stories. These stories often link to a group’s main webpage where individuals have the opportunity to donate, sign petitions, and send letters or e-mails to their state and national representatives. These final steps are also important for gaining the attention of policy leaders in Washington.

The final step taken by environmental NPOs is to gain the attention of government officials through constituent attention and building relationships with leaders through necessary lobbying. In the American political system, it is necessary to contribute to candidate funding to lobby important issues. Because of limited funding, environmental organization’s contribution is quite small when compared to large industries and corporations with competing views. This is why the other two tactics – building coalitions and informing the publics – are also essential for an NPO facing crisis.

In modern society, environmental nonprofit organizations are constantly on the brink of crisis. There is an ongoing chance that one of the many issues watched by an organization will suddenly tip over into crisis. When this takes place, organizations must be ready to respond quickly. To do so, they must be prepared with a communication action plan – an established coalition of supporters, a means for networking and informing the public, and the presence of influential lobbyists in Washington. The primary purpose of environmental nonprofits is to influence public policy, organizational action, or social norms and values (Smith, 1997). In the case of the Alaska National Wildlife Refuge, their success can be gauged by President Obama’s January 2015 endorsement to further protect this valuable sanctuary. Their dedicated and widespread communication tactics are a fundamental element of this victory. It is likely, this is not last time ANWR will be under attack, therefore it is important that environmentalists and their supporters remain prepared with a plan in place for rapid mobilization when the future tipping event strikes again.

I was a teacher for the Anchorage School District for Five years. This job often required early Saturday mornings working at various enrichment activities. I would often stop at my corner Holiday convenience store for a quick cup of coffee with a week’s worth of sugar to make it through the morning. On one of these particular Saturday’s I had a memorable experience. Nothing earth shaking, but a quiet, observational moment that resonates still today.

While I was debating French Vanilla and Amaretto, I noticed a gentleman to my right grabbing a glazed twist donut and waiting to fill his own cheap cup of coffee. He wore a sponsored coat (the kind you’re given by KTUU or some other entity for being a part of an event or conference) and what looked like a suit underneath. After noticing this man, I made a double take. He bore a striking resemblance to my U.S. Senator, Mark Begich. This second look afforded me a confirmation that our national Congress member was indeed buying a $.49 donut and $.99 cup of coffee. I was surprised. I figured he would at least go for the expensive cup at the stand outside and be wearing a fancy, Washington D.C. grade wool coat. He was ahead of me in line and gave me the opportunity to quietly observe the polite, patient way he regarded the attendant and as he walked out, I saw he was stepping into, not a black sports car or expensive Sedan, but a circa ‘90s red rodeo. Like they say, you can tell a lot about a man by his car. What this told me was he was not a senator who made pretensions in dress, wheels, or food. He was unassuming as he waited in line for his quick breakfast – just as we all did on our rush to whatever early Saturday morning activity we had in store. The point of this story is this: he is not only our representative; he is one of us, an Alaskan with an addiction to caffeine, cheap or not, and a car that can withstand inclement weather.

Today, Senator Mark Begich is in the midst of an election where he stands against Dan Sullivan, a non-Alaskan supported by those who do not have our best interests at our hearts and excess money in their pockets. From what I have read, I ascertain he is not the type of man who would drive an old red jeep or buy a cheap cup of Joe, let alone wait patiently in line for it. 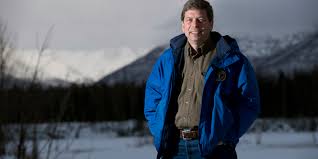 With the new age of social media I have had the opportunity to share my old story about Mark Begich. Not only that, Twitter has given me the opportunity to follow this man of the people and have the pleasure of having my own tweets retweeted by someone I respect, “follow”, and support – online and offline. It has also led me to new individuals and groups to follow. So – for a final political tagline for my Alaskan friends – If you want someone who will support our interests, and protect our land – vote for one of us – Mark Begich.